The RNC is finally doing something about election integrity.

The RNC is suing the cities of Montpelier and Winooski, Vermont for allowing non-citizens to vote.

The RNC and the VTGOP are today suing the cities of Montpelier and Winooski, Vermont over their new town charters that allow noncitizens to vote in their municipal elections.

This radical scheme passed by state Democrats is a blatant attack on election integrity. pic.twitter.com/YfU2ZLxw3D 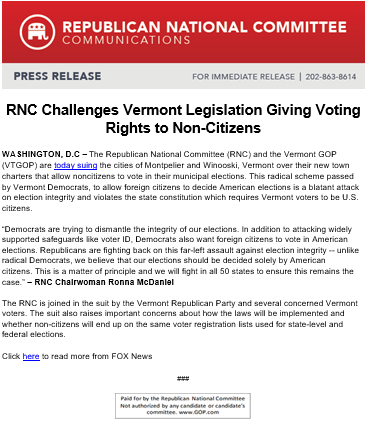 “Democrats are trying to dismantle the integrity of our elections,” RNC chairwoman Ronna McDaniel said Monday. “In addition to attacking widely supported safeguards like voter ID, Democrats also want foreign citizens to vote in American elections. Republicans are fighting back on this far-left assault against election integrity — unlike radical Democrats, we believe that our elections should be decided solely by American citizens. This is a matter of principle and we will fight in all 50 states to ensure this remains the case.”

The case centers around the Vermont cities of Montpelier and Winooski, who in May had changes to their charters approved by the state’s Senate that allowed noncitizens to vote in their municipal elections.

“I believe if someone wishes to be able to vote they should be a citizen,” Vermont state Sen. Brian Collamore told Fox News in an interview at the time. “The Montpelier bill allows what is defined as a legal resident of the United States to be able to vote in city elections. … If someone is here on a permanent basis, why would he or she not want to participate in the process to become a citizen?” Use promo code PTN at checkout and save big on MyCoffee. (Pro Trump News benefits when you use this promo code.) Use promo code WLT at checkout and save big on these luxurious MyPillow Percale Bed Sheets. (Noah Report benefits when you use this promo code.)